Return to My Reading Room

One of the great things about being a writer, is meeting and learning from other writers, authors who may not be internationally well-known like Nora Roberts, or Nelson DeMille, but whose talent knocks your socks off; writers like Joanna Bourne. 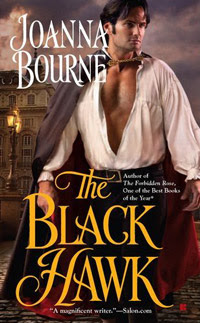 Attacked on a rainy London street, veteran spy Justine DeCabrillac knows only one man can save her: Hawker, her oldest friend . . . her oldest enemy. London’s crawling with hidden assassins and someone is out to frame Hawker for murder. The two spies must work together to find who’s out to destroy them…

I read this book a few years ago. If you’ve not read it, or any of Jo’s books, do. The Black Hawk was nominated for the 2011 Romantic Times Historical Romance Novel of the Year…

Romantic Times Rating – 4 1/2 stars…”Bourne grips readers from the beginning and holds them to the very end of her powerfully written thriller. Few authors delve into espionage in France and England with as much panache as Bourne, nor do many bring their characters through decades in flashbacks with aplomb. This is a novel romance that readers won’t forget.”

Jo is an author you can’t forget. Her characters, unforgettable. You will not be disappointed.

In everything one must consider the end. ~Jean de La Fontaine

Permanent link to this article: https://www.deborahsmall.com/debs-reading-room/the-black-hawk/